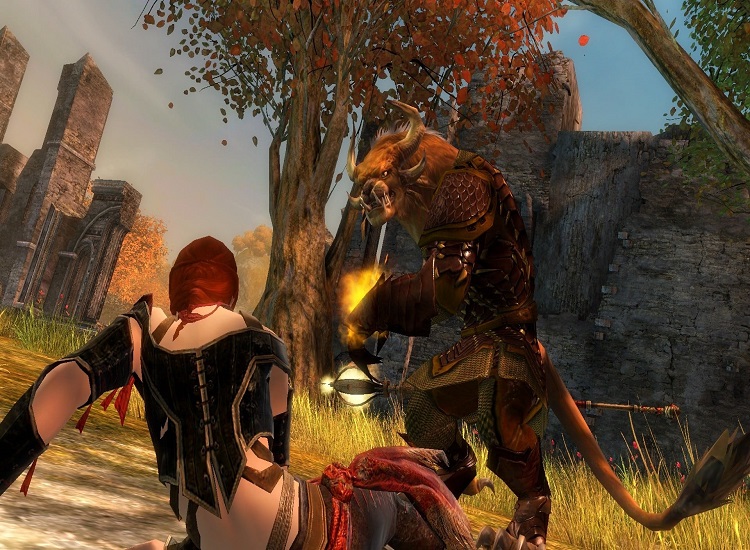 Like the original, Guild Wars 2 only lets you use a limited number of your skills at any given time, called builds. The main difference this time is that many of these skills are tied to weapons. You can have 2 weapon sets and can swap between them in combat.

The only exception to this is Element lists, they can only use one weapon set in combat, but can change between the 4 elements instead. Another thing that sets Guild Wars 2 apart from other MMO’s is the removal of the Trinity. For the most part, there are no tanks or healers, everyone is a DPS. You get 5 weapon skills, a healing skill, 3 utilities, and elite. This forces players to play smarter, instead of relying on others to keep them alive.

In PVE, Guild Wars 2 gets rid of the traditional questing that most MMO’s have, and replaces it with dynamic events and solo stories. You can do solo stories with your party, but only the player on the quest will get experience and gold for completing it.

The dynamic events are events that happen every so often in an area that everyone can complete without being in a group. They will be something like killing a number of a mob, collect something, or kill a boss. You get experience, gold, and karma, which is used to buy armor, weapons, and accessories.

The best part of Guild Wars 2 PVE is you can play with friends regardless of levels. If, for example, you are level 40 and want to play with a friend who just started, you will automatically become level 6 when you enter the starting area. You keep your equipment and skills, but their effectiveness is as if you are at the lower level.

Guild Wars 2 PVP is similar to other MMO’s and the original, however, everyone is maxed level. There are currently 3 types of PVP available, random structured, and tournament.

In World vs. World vs. World, your server is pitted against 2 other servers in world pop for a 2 week-long battle.  Each server will have a home, but the other 2 servers can come to your home base and take your buildings. There is also the main battlefield. Like dynamic events, you don’t need to be grouped up to get credit.

The Best Entertainment News in the Film World

How to Watch Free Movies on the Internet

The Best Entertainment News in the Film World

Another Best Way for Entertainment is Baseball 42

The Oblivion Movie All-time Best Entertainment for This Time

Video Games and the Freedom to Choose Entertainment for All